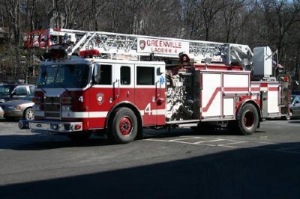 Edgemont residents will decide Tuesday, December 9, whether to authorize its fire district to borrow up to $1.785 million to pay for the cost of a new ladder truck to replace one that is now 13 years old, repairs to the firehouse itself, and a sudden unprecedented five-fold increase in Town-negotiated tax certiorari refunds.

All five Greenville fire commissioners support the borrowing and at its regular monthly meeting last week, the Edgemont Community Council unanimously supported it too.

Town Supervisor Paul Feiner, who does not live in any of the fire districts but is actively waging a campaign on behalf of two candidates for fire commissioner in the Hartsdale and Fairview Fire Districts with Feiner-recorded robo calls and mailings, was also thought to be behind a campaign to get voters to oppose the Edgemont bond referendum, but he denies it.

In the meantime, Greenville fire district commissioners responded yesterday to an election eve story in the Journal News that Greenburgh police had been investigating whether fire district officials were somehow involved in a criminal insurance fraud scheme more than two years ago to get the district to collect $4,000 in damages from its insurance carrier after its ladder truck — the one that will be replaced if the bond issue is approved — was involved in a collision at the corner of Ardsley Road and Old Army Road.

The source of the “insurance fraud” complaint appears to have been a former Greenville fire captain who was upset that his son had been fired by Greenville as an entry-level fireman.   The fire captain’s claims against the district have since been settled, but terms were not disclosed.

Shortly after the Journal News story was published on Sunday, former Journal News editor Milt Hoffman, who works with Mr. Feiner on fire district matters, issued an email blast about a “million dollar fraud” in the Greenville fire district.

In fact, even though the insurance claim was for $4,000, the misinformation from Mr. Hoffman spread rapidly, with an online publication, the Daily Greenburgh Voice erroneously reporting today that the entire $1 million ladder truck was “lost” in the 2012 accident and that the bond referendum is to replace the truck that was “lost.”

Repeated efforts by Greenville fire district officials to get the Daily Greenburgh Voice to correct its story were unsuccessful — thereby perpetuating what looks to be an election eve smear.

Jon Faust, a Greenville fire commissioner, issued the following statement on behalf of the district:

“We welcome any investigation into the August 2012 accident, as the District’s conduct was proper in all respects. We note that the events as reported simply do not support any claim of insurance fraud. It is undisputed that District Ladder L-4, while en route to a emergency call, incurred about $4,000 in damages after being hit by a 17 year old driver. As an emergency vehicle responding to a call, L-4 was authorized to use lights/sirens. The police promptly
responded to the scene of the accident and conducted appropriate inquiry. Submission of this minor damage claim to the insurer was warranted and handled in the ordinary course.

We do not know what would prompt any  investigation into this $4,000 insurance claim 2 1/2 years after the fact, or how and why the existence of any such investigation (which itself is probative of nothing) was leaked on the eve of fire district elections. Nevertheless, we will assist in any investigation, and hope that investigation results exonerating the District also will be reported.”

In an effort to buttress its reporting, the Journal News is reporting in tomorrow’s edition that the police investigation of the alleged “insurance fraud” has been going on “for several months.”  The Journal News said it had obtained a letter from the Westchester DA’s office from last April responding to the complaint by saying it would refer the matter to the Greenburgh police department for investigation, and appears to have assumed that meant the investigation had been going on for months.

However, fire officials said they heard nothing about any investigation until they read about it the Journal News on Sunday.

This entry was posted in Litigation, Police, Town of Greenburgh. Bookmark the permalink.