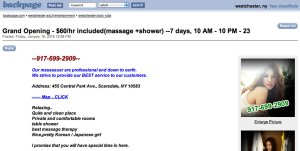 Two “massage parlors” on Central Avenue in Edgemont — including one directly across the street from the Greenburgh Nature Center — today announced “grand openings” that may have spurred town officials tonight to reconsider proposed landmark legislation from the Edgemont Community Council that would outlaw such businesses.

The Town Board announced on the town website that it will be holding a special meeting Tuesday to introduce “massage establishment” legislation.

In an email earlier today to ECC president Bob Bernstein, who drafted the ECC proposal, Town Supervisor Paul Feiner said the legislation introduced would be the version that Mr. Bernstein had originally drafted and submitted to the Town earlier this month after the ECC had unanimously approved it.

The massage parlors ads, published online today, came two days after the Town failed to introduce the ECC proposal that would effectively outlaw all brothels fronting as massage parlors in unincorporated Greenburgh.

The ECC proposal would give the Greenburgh police the tools it needs to shut down houses of prostitution masquerading as “massage parlors” by requiring that all such facilities obtain licenses from the Town Clerk and special permits from the Town Board, and permanently closing down all such facilities that don’t have them — all without having to incur the time and expense of conducting a costly prostitution sting operation which, even if successful, would usually only result in the massage parlors reopening often in the exact same locations.

Police Chief  Chris McNerney said the absence of effective legislation in Greenburgh has hamstrung his department, allowed these facilities to proliferate, and allowed Edgemont to become the “massage parlor capital of Westchester County.”

The two massage parlors with “grand openings” are located at 455 Central Avenue (across from the nature center) and at 114 S. Central Avenue, respectively.  Both ads featured photos of young scantily clad Asian women. One ad offered “nice pretty Korean Japanese girl” and a “special time in here” and the other offered “Wow-heavenly feel Japanese Korean Chinese Massage” that will “leave you extra relaxed.”

Even though other towns and villages in New York have enacted similar bans, Mr. Lewis has said he does not believe towns in New York have the legal authority to outlaw brothels fronting as massage parlors and opposes enactment of the ECC proposal.

Mr. Feiner also released an email from Town Clerk Judith Beville in which she promised to comply with the terms of any “massage establishment” law the Town Board may enact.  Ms. Beville had opposed introduction of the measure Wednesday night.  It is not clear from her email whether Ms. Beville would continue to oppose the measure anyway or keep quiet this time and allow it to be introduced.

Even though no measure has actually been introduced, the Town Board says it has already scheduled a public hearing to consider the ECC’s proposal for February 11, 2015.

Since the Town’s refusal to introduce the ECCs massage legislation Wednesday night, Mr. Bernstein has furnished Mr. Feiner and other town officials with a legal opinion explaining why the Town has the legal authority in New York to enact the ECC measure.