Police Chief Chris McNerney told the Greenburgh town board Wednesday that all six of the massage parlors that had been closed two weeks ago following the arrests of 11 women at these locations — including one as young as 18 years old — for allegedly working as massage therapists without a license have all reopened.

The reopening of these businesses, five of which are on Central Avenue in Edgemont and one on Tarrytown Road, highlights the need for the legislation drafted by Edgemont Community Council president Bob Bernstein, which would give Greenburgh police the legal tools they say they need — and which other New York towns and villages have already succeeded in giving their police without any legal challenge for the past sixteen years — to shut down brothels fronting as massage parlors permanently.

But the Town appears no closer to enacting the legislation which is before the Planning Board where its chair has said she will not allow it to be considered unless the town asks for an opinion from the attorney general’s office and gets a response.

For its part, because the town attorney opposes the legislation, the Town is continuing to solicit non-binding legal opinions from third parties to support the town attorney’s opinion that towns in New York are legally “preempted” from enacting such legislation. 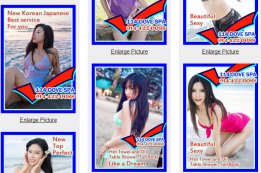 In an email blast this morning, Town Supervisor Paul Feiner said a lawyer for the Association of Towns had given the town an opinion that “local governments may not have the ability under NYS law to regulate massage parlors.”  Mr. Feiner did not release a copy of the Association of Towns’ opinion; nor would he release copies of what information the town attorney had provided to that lawyer.

Meanwhile, the Town did release a copy of a four-page single spaced March 16, 2015 letter drafted by Chief McNerney to the attorney general’s office explaining why state law gives local governments the legal authority to close down brothels fronting as massage parlors.  It is not clear whether the letter was actually sent.

“I strongly believe that the Town of Greenburgh’s proposed local law is needed and is not preempted by New York State law,” Chief McNerney wrote.  “The intent of our proposed law is to curtail criminal activity at businesses within the Town and to eliminate businesses which jeopardize the public health, safety and welfare,” he added.

The Town Board is scheduled to address whether to send its own letter to the Attorney General’s office at a work session on April 6.

Mr. Bernstein urged the Town Board at its Wednesday meeting not to send the letter because it could take as long as nine months before the Attorney General’s office responds, during which time brothels fronting as massage parlors in Greenburgh will continue to operate and possibly open up in even more locations within the Town.  And even when the attorney general’s office does respond, he said, the response itself is not binding legally and, given past practice, if the letter is sent to the town attorney’s office, there is no assurance that the Town will even release the response in a timely manner.

The Town did not disclose for six years a response the town attorney received to a request from the state comptroller for a non-binding legal opinion about responsibility for funding sidewalks in Edgemont.

Consequently, Mr. Bernstein said sending the letter to the attorney general’s office will just erect another pointless roadblock to delay enactment of legislation aimed not just at quality of life, but at a serious human rights problem.

In a letter published in yesterday’s Scarsdale Inquirer, Chief McNerney said he supported Mr. Bernstein’s proposed legislation, but given the town attorney’s opposition to the proposal, he was willing to go along along with writing to the attorney general, even if it meant that enactment of the legislation is delayed for an indefinite period of time.

Mr. Feiner has meanwhile told certain residents in emails that he opposes sending a new letter to the attorney general’s office.  It is not clear whether he is telling other town board members the same thing.

“I’d prefer not sending the letter,” Mr. Feiner said in an email to a resident with close ties to a local Chinese-American group that supports the proposed legislation.  “But also don’t want to upset the Planning Board.  The AG’s office is aware that we’re considering the legislation. If they are offended by the actions we’re talking, they have the right to initiate a letter to us telling us that what we plan to do is wrong.  Since they are on notice, I don’t see the need for a letter,” he added.

While the Town continues to drag its feet on enacting the proposed legislation, town officials are suddenly scrambling to demonstrate publicly that they are opposed to human trafficking.

For example, town clerk Judith Beville, who opposes the proposed legislation and, even though she has no vote, successfully blocked it from being introduced the first time it was on the town board agenda, is sponsoring a meeting at town hall with Mr. Feiner this week on human trafficking and massage parlors.